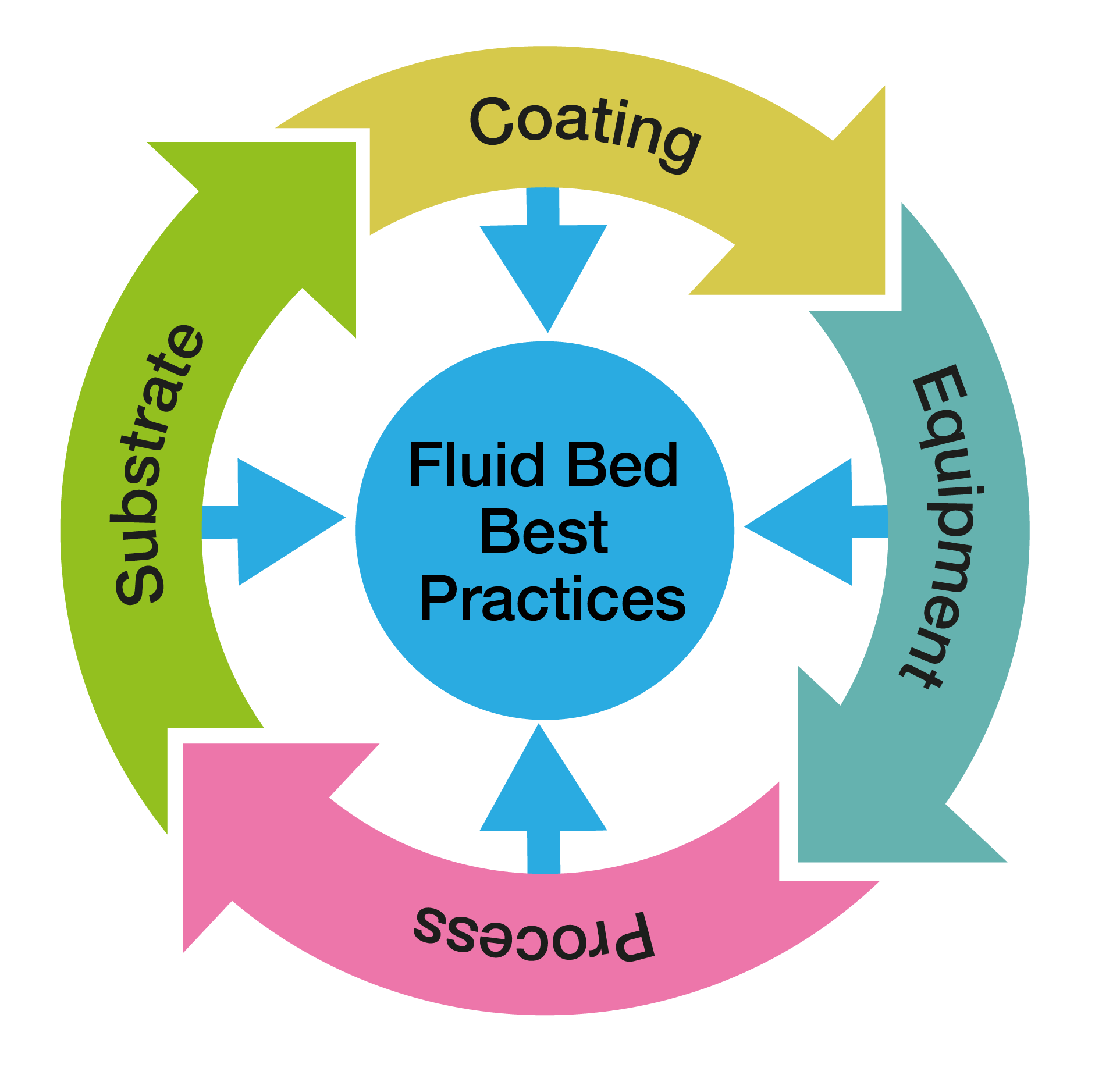 Multiparticulate dosage forms are complex, and the application of coatings to extend drug release can present challenges.  Substrate properties, coating formulation, equipment and process conditions are all considerations that affect final drug release.  Colorcon has developed best practice guidelines to accelerate product development and support consistent manufacture throughout the lifecycle of your commercial multiparticulate dosage product.

This first installment of Fluid Bed Best Practices for Multiparticulate Formulations will cover the importance of surface area to film thickness (SA/FT) ratio when coating multiparticulates for extended release performance.

The Importance of Substrate and Coating

During the development of a modified release multiparticulate, a key consideration is the coating formulation; with the selection of polymer being a critical determinant to attain the desired functionality and stability. Once the coating formulation is established then the amount of coating applied to achieve the target release profile can be determined.

While the level of coating is important, the robustness for the manufacture of these dosage forms should also be considered. It’s well understood that higher coating weight gain increases the film thickness, resulting in a slower release profile. With extended release products, however, film thickness is only part of the story. Understanding the influence of surface area to film thickness ratio (SA/FT) on the performance of a multiparticulate formulation is critical. Sphere characteristics are important to provide a robust starting substrate with consistent surface area to ensure reliable performance.

This concept is best understood when considering Fick's Law of Diffusion (Martin's Physical Pharmacy) which defines the various factors and how they influence drug release. From this equation, we can better understand the relation of total surface area (S) and film thickness (h) to drug release rate (dM/dT).

Release rate is inversely related to film thickness.  During development, the film thickness is empirically determined by the successive application of increasing amounts of the coating. But in practice, this film thickness is influenced by many other parameters such as uncoated substrate size, the density of the substrate and successive coating layers, as well as coating efficiency.  The effect of these parameters is too often determined after scale-up or commercialization when it’s too late to make changes.

So, what is the best way to design a robust multiparticulate formulation that will successfully transfer from the lab through scale-up and manufacture?

Looking back at Fick’s equation, it’s important to consider the total surface area to film thickness ratio. These two variables are closely linked and therefore cause an exponential effect on your drug release. (Link to Reference: Colorcon AAPS Poster, 2004) 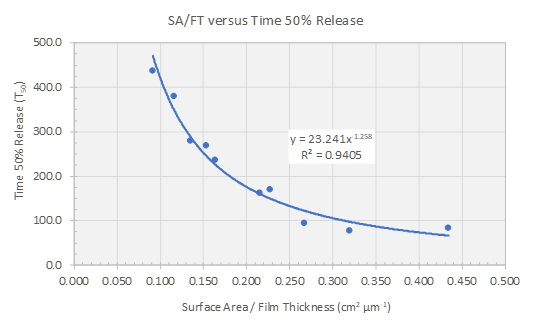 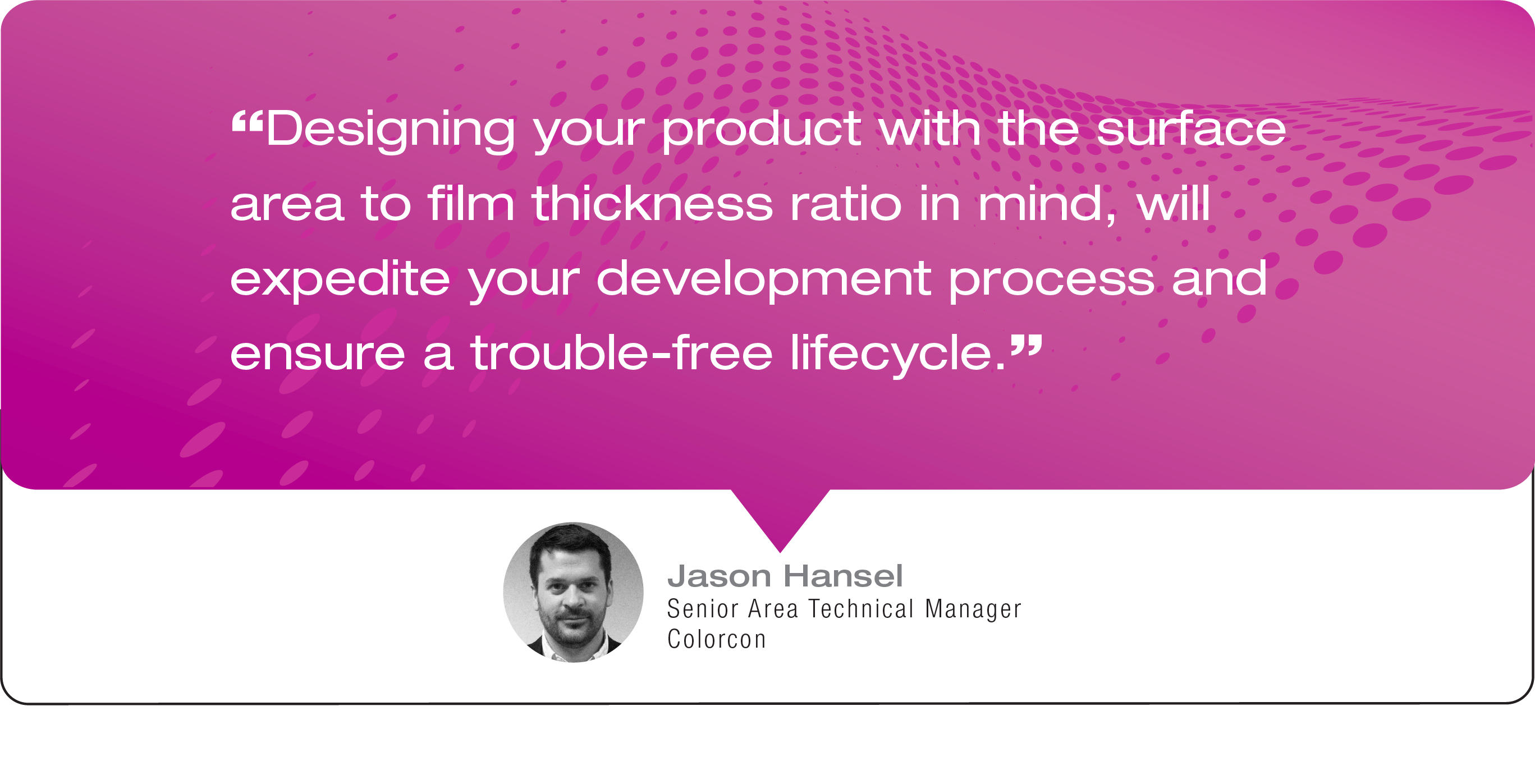 To assist with the development of multiparticulate formulations, Colorcon offers consulting through My Dosage Design™, a theoretical modeling tool that helps determine the optimal particle size, surface area to film thickness ratio, the volume of the final dosage and optimal capsule size selection.

Let us help you select your coating formulation and starting substrate on your next formulation. Connect with Colorcon to embark on a new multiparticulate project.